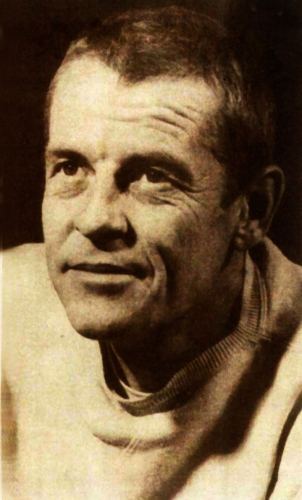 Coming from an affluent family, Don was originally from Nebraska. During the 30´s he studied at the fine Arts Institute of Chicago thinking to become a painter. Visiting Mexico for his honeymoon he fell in love with the country and he finally decided to move to Mexico in the late 40´s. He lived for a while and painted in San Miguel Allende, Guanajuato, but finally he settled down in a little uphill town called Santa María de Guido, overseeing the city of Morelia, in the state of Michoacan , Mexico.

Don began the manufacture of his furniture in tropical precious woods and other wood products. What started as a little factory in the late 50´s called SEÑAL,S.A., grew to the point where Don employed more than a hundred skilled craftsmen. Soon Shoemaker became an important milestone of the economic and cultural life of his adopted home. SEÑAL, S.A. brought great wealth and economical boost to the village and Don was well known for his good heart and charity projects.

Don S. Shoemaker delivered furniture pieces in to his showrooms in Chicago, Los Angeles, Houston and large cities in Mexico. His designs were very much appreciated by wealthy Mexican families wich had complete sets decorating their haciendas and luxury homes.

Don had three children, but his son, George, was the only one involved in the bussiness. When Don passed away in May of 1990, Geoge took over and started reproducing Don´s designs under the label of “Arrendadora Shoemaker”. Unfortunatly, George died in the early 2000´s and the company disappeared and was dissolved for good.

Shoemaker´s furniture are now praised and cherised by collectors around the world. His use of the most beautiful exotic woods from the region of Michoacán, along with his brilliance in design and mastery of craft endow his pieces with timeless beauty and growing value.